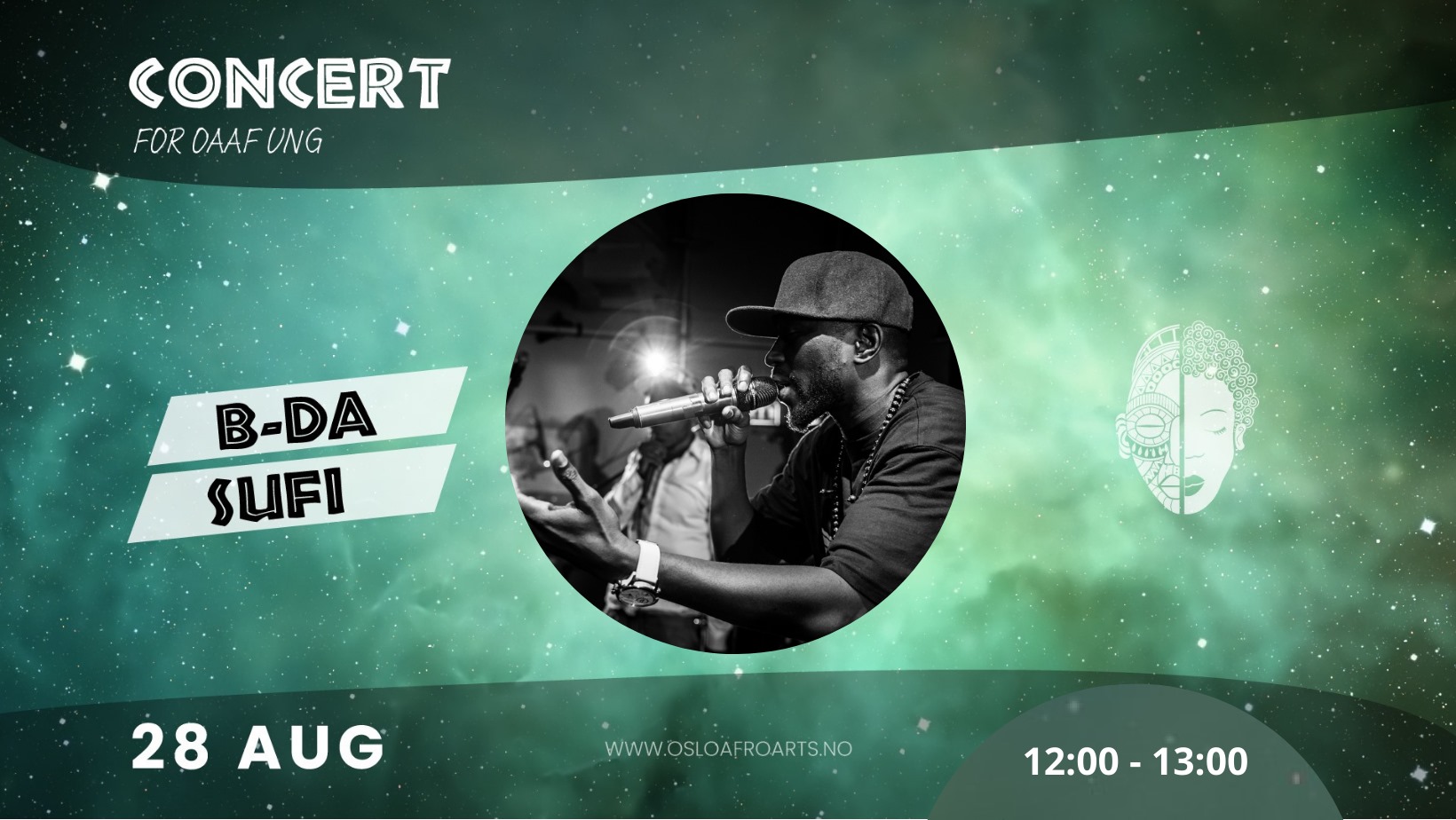 B-Da Sufi is an independent hip hop artist/Emcee from West-Africa. B-Da Sufi is now residing in Oslo, Norway, where he has developed an own multilingual style. B-Da Sufi raps in English, Norwegian, wolof and other languages. The mix of different languages gives B-Da Sufi a Unique and interesting style of hip hop. He has released 5 studio albums, and is a very popular artist in West-Africa. He is a vivid and mesmerizing live artist.

Though born in Gambia, Babacarr Joof grew up both in Senegal and The Gambia. He was 17, when his path from Babacarr to B-Da Sufi started. When his cousins introduced B-Da Sufi to rap 1996, he was immediately inspired by the music that so openly addressed important topics like slavery, poverty and politics. Two years later, he entered the studio and started to record his first songs in collaboration with his family. The following years he did a lot of live acts, and was productive in writing music. He cofounded Diegui Rails, which has developed into one of the biggest production company in Senegal.

B-Da Sufi’s first album “Love & Peace” was released in 2007. Overnight he became a well-known name all over Senegambia. He did a lot of radio and TV-interviews in the region, and performed at several hip hop festivals and events in Senegal, Gambia and Mauritania. His next album “Just for the Love” came out in 2010, followed by “Hip Hop Still” in 2013. The years in between the two albums, led him out on a different and unexpected journey, to the Northern hemisphere. B Da-Sufi moved to Oslo and Norway in 2012.

There is no doubt that this move has influenced his music. Nevertheless he remains faithful to his style, throughout different musical collaborations and inspirations. In 2017 he released an Ep called “I Wish”, which featured many great artists, like Ole-O of DRM Klikk, Sheldon Blackman, King Milo, Singateh, Njie B, Sarah B, Dj Tocznique, Bafana Isaac Nhlapo, Dj Leuz and Jason Nemor Harden. The Ep was produced by Omar Traore (Zap) xalam studio Gambia. All the songs were recorded in Oslo under X-Ray Ungdomskulturhus, Park music and DRM studio.

West-Africa has remained his main inspiration though, and when he blends blues into his Newest album, it may have awoken in within the blues community in the north, but the colours and flavor found on B-Da Sufi’s new album “Flowing into the Blues” comes from Mali. The album was released in November 2018 on all major platforms. The release concert on November 24th at Cafeteatret was with a full band. This album has a special flavor of blues and Hiphop with live guitars. As B Da-Sufi recently visited the Gambia and Senegal, to promote his newest album “Flowing into the Blues”, the radio and television stations within the Senegambia region, were fighting with unlimited invitations to get their part of B Da-Sufi. This is usually the tradition for musicians who had made an impact in the musical industry. And even if he had this role before traveling abroad, this particular experience was above B Da-Sufi’s expectations. The invitations and the appreciations from his people is clear evidence that hard work pays off, the rapper says. Bda-Sufi has left another significant mark back home. B Da-Sufi continues his musical journey. To reach the reach the audience in Scandinavia, the lyrics of his music has been more English. Expect that to change on the following records.

Oslo may give the rapper a free space to play around creatively, but Senegambia is his heart and soul.Wolof is coming back..