Panel discussion: Roots – Being queer in Africa is not un-African (FREE)

HomePanel discussion: Roots – Being queer in Africa is not un-African (FREE) 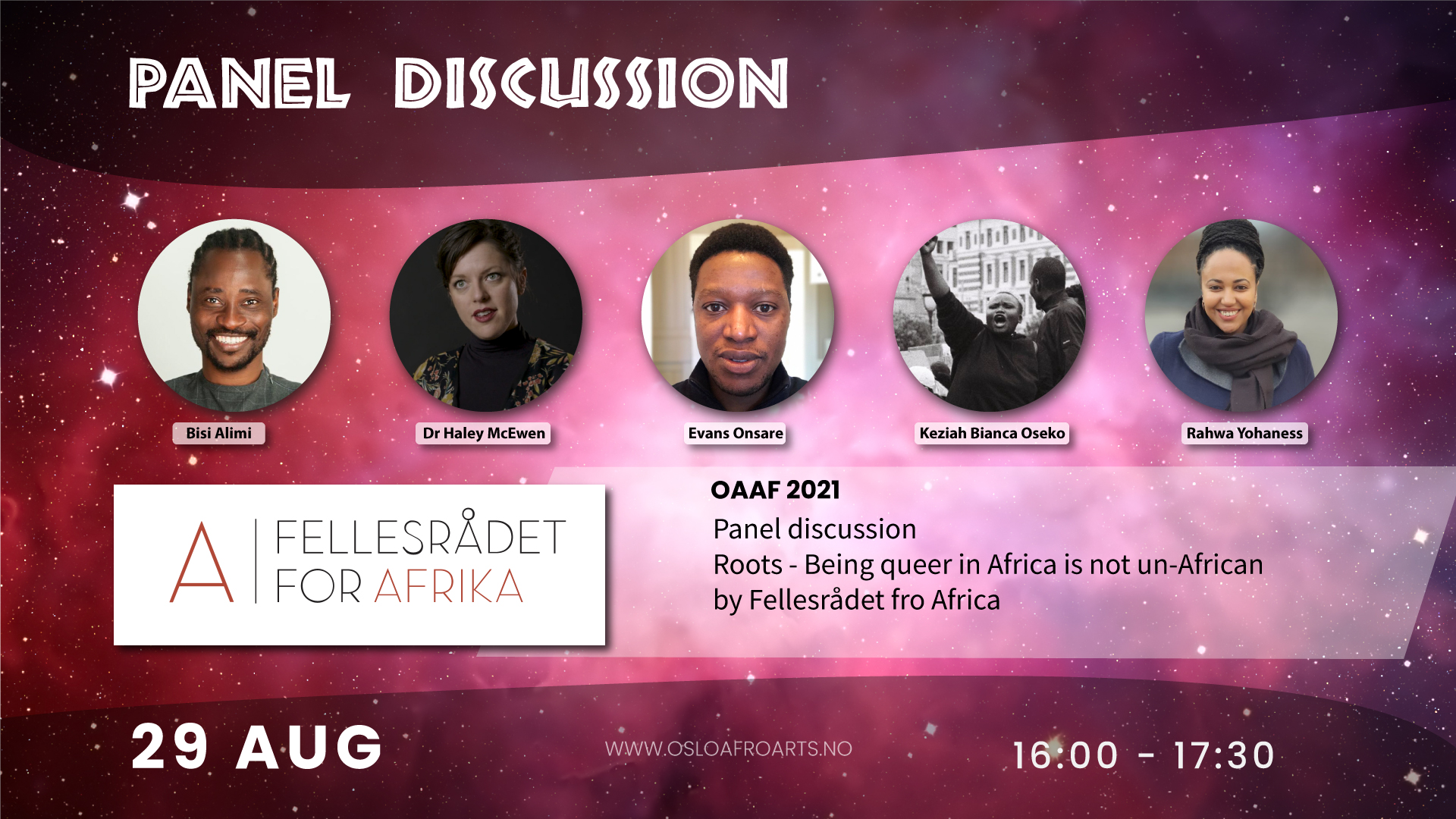 Panel discussion: Roots – Being queer in Africa is not un-African (FREE)

There is a false belief in many countries that homosexuality is “un-African” and something that has been imported from the West. The penal codes are often remnants of inherited laws from the colonial era, while research shows that in many African communities it was accepted with fluid sexual identities. What are the roots of queerness in African societies, how did colonialism and their penal codes impact the situation for queer African people and what is the way forward?

Evans Onsare has many years of experience in grassroots organization building in the LGBTQI+ movement in Kenya dating back to 2010. He is a co-founder of SEI (support empowerment initiative) CBO (community-based organisation) located in Kisii Kenya. He is currently in the process of settling in Norway and finding ways to continue with activism which he is passionate about.

Haley McEwen (PhD, Sociology) is Senior Researcher at the Wits Centre for Diversity Studies at the University of the Witwatersrand, Johannesburg. Haley’s research investigates the anti-gender, or ‘pro-family’, countermovement against sexual and reproducive rights in African countries. She has published several scholarly and popular articles on the topic. Recently, she wrote a report for SAIH, Un/knowing and un/doing gender and sexuality diversity: The anti-gender movement against SOGIE rights and academic freedom.  Haley is a Senior Fellow at the Center for Analysis of the Radical Right and Associate Editor of the International Journal of Critical Diversity Studies.

Bisi Alimi is the Founder and Executive Director of the Bisi Alimi Foundation. He is an “Angelic Troublemaker Incarnate” and an internationally renowned researcher, public speaker, policy analyst, television pundit, campaigner and community builder with expertise in sexual health and human and LGBT rights.

In 2004, Alimi was the first Nigerian to openly declare his sexuality on national television, which led to threats to his life and his resulting move to the United Kingdom where he was a refugee until he was granted British citizenship in December 2014. He has engaged with the media for social change ever since.

He has appeared on many international television stations including, CNN, BBC, Al Jazeera, and CCTV, and outlets like NPR and the Washington Post has profiled him. He consults for World Bank on Economic impact of Homophobia and serves on the Bank advisory board on SOGI. He was a 2014 New Voices fellow at the Aspen Institute. Bisi was listed as one of the 19 most important LGBT person in UK 2015 and was named 77 on the World Pride Power List 2014.

His TEDx talk, “There should never be another Ibrahim” was listed as one of the 14 most inspiring queer TEDtalks of all time. He won the first London Moth slam and was storyteller at a recent London Moth Main Stage. His article The Development Cost of Homophobia has been translated into over 15 languages and his most recent article for the Guardian: “If You Say Being Gay Is Not African, You Don’t Know Your History” has been cited in many news articles globally.

Alimi is a consultant with the World Bank on the Economic impact of Homophobia and serves on the World Bank advisory board on Sexual Orientation and Gender Identity. He was a 2014 New Voices fellow at the Aspen Institute, has been listed four years in a row on the UK LGBT list and was named 77 on the World Pride Power List 2014.

Keziah Bianca Oseko is a human rights activist from Kenya who is currently studying social work in Norway. In 2018 she participated in a NOREC exchange project and was placed in Stiftelsen Amathea as a sexual reproductive health and rights advisor working mostly with women with minority background. She has experience working with women, girls and young people both in Kenya and in Norway.

The session will be moderated by Rahwa Yohaness.

Rahwa is a public speaker, activist and the founder of Manifold, an organization promoting diversity and positive changes in society with focus on empowering Black and minority women and youth in Norway. Rahwa is the partnerships and events coordinator of African Innovation Week and has been involved in movements such as Hack Africa Against the Covid-19 crisis and hosts a series of talks raising awareness about intersectional identities. She currently works as a consultant at the Norwegian Council for Africa. She has also been one of the front-runners of the “Decolonizing Academia” debate in Norway on a grassroots level, always providing a critical but generous voice in the room. At the University of Oslo, Rahwa is political advisor of the African Student Association (ASA), where she previously served as president. Rahwa was also one of the main organizers behind the “We Can’t Breathe” Black Lives Matter demonstration in Olso in June 2020. In her work, Rahwa collaborates closely with grassroot organisations, academics, artists, and activists in the diaspora to organize and facilitate a variety of events, including panel discussions, educational and artistic workshops as well as community gatherings.